But what type of lifting should you do?

Most runners will do low weight and high repetition lifts instead of lifting heavy weights because they don’t want to get “bulky”. Fortunately, that’s not how physiology works. In order to bulk up and gain muscle, you must be in a caloric surplus while also eating adequate amounts of protein to stimulate muscle protein synthesis. As endurance athletes, this is very hard to do. As I discussed in my previous blog, endurance training shuts down the pathway that leads to increased muscle size. Adding muscle to your body and getting JACKED is extremely difficult even if you’re not a runner/endurance athlete. It takes months or even years of lifting heavy weights to gain substantial size (just like it takes years to become a better runner). And if you’re a woman, you have even less to worry about! Because women have 10-20x less testosterone than men, bulking up becomes extremely difficult whether you’re running or not.

Well, think about what running is. Running is essentially jumping from 1 foot to the other, kind of doing a single leg squat. So, you’re doing hundreds to thousands of repetitions when you’re out for a run at a very low weight. So then why would you do the same thing in the weight room? You’re already getting the muscular endurance that you need from running or biking with that low weight, high repetition movement. Instead, you should be incorporating heavy weight, low repetition lifts into your repertoire.

Lifting heavy weights will help you in a few ways. First, it can improve neuromuscular coordination and power. Lifting weights does this by causing your brain to change how it recruits muscle fibers. Instead of using the more fatigable muscle fibers (Type II), the brain uses the most fatigue-resistant fibers first (Type I), so you expend less energy. The brain and nervous system create stronger pathways for these muscle fibers to become recruited. Here’s an analogy to help understand how muscle fibers are recruited: the first time you do a maze, you’re going to make a lot of wrong turns, hit dead ends, and take a long time to complete the maze. But the more you do the maze, the less wrong turns you will make, the fewer dead ends you will hit, and the faster you will complete the maze. When your brain sends a signal to the muscles to contract, the signal must go through this kind of “maze” in order to recruit the appropriate muscle fibers. Lifting heavy weights helps strengthen the pathway making it easier for the signal to get to the correct muscle fibers. 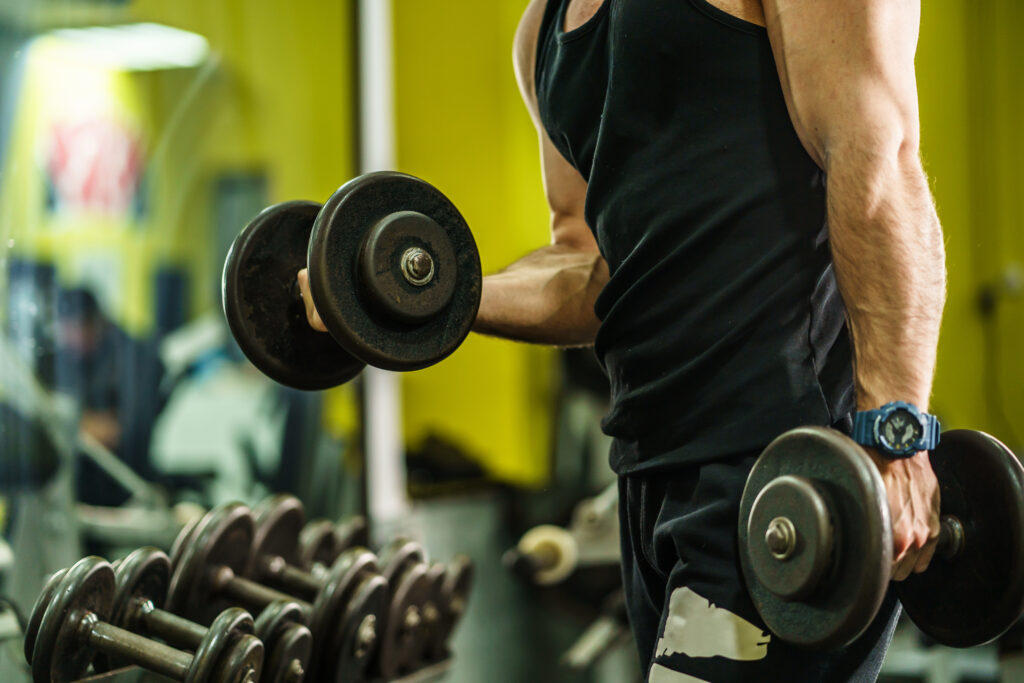 So, what does heavy weights and low repetition lifting mean exactly?

To get the most benefit from lifting weights, you need to do 3-5 repetitions at 75-85% of your 1-repetition maximum for 3-5 sets. To put this in perspective, endurance athletes when lifting weights typically only lift 50% of their maximum…these lifts should nothing like that. Instead, they should feel heavy and hard! You also want to perform the lifts quickly! The goal is to produce power which means moving a lot of weight over a short amount of time. Being strong doesn’t help us much as endurance athletes if we can’t do it quickly. A single foot strike lasts about 200-300 milliseconds! Therefore, the goal is to lift your weight as quickly (and safely using good form!) as possible.

Make sure you take ample rest between sets (3-5 minutes). The reason you want to take more rest is to allow your muscles and nervous system time to regenerate energy to lift the heavy weight at maximal speed. This isn’t like endurance training where you take short amounts of rest between intervals or repetitions. The energy system used when doing these very heavy lifts is completely different than the energy system used to lift lower weight and higher repetitions. And this energy system needs much more time to recover than the other energy system. This is why you should take ample rest so you can be at full strength when performing these heavy lifts.

As a beginner, start on the higher end of the repetitions and lower end of the weight and set ranges. As your lifting progresses, move toward the lower end of the repetitions and higher end of the weight and set ranges. Just like you would do with run training, make sure you progress slowly. A good rule of thumb for progression is the 2 for 2 rule: If you can perform at least 2 repetitions more than your assigned repetition goal for a certain exercise in the last set in 2 consecutive workouts, you should add weight to that exercise for the next training session. For example, if you were assigned 4 sets of squats for 4 repetitions and you were able to complete 6 squats in your last set for 2 weeks in a row, you should increase the weight in your next session. For lower body exercises, you should aim to increase the weight by 5-10 pounds. For upper body exercises, aim for 2.5-5 pounds (it’s hard to put an exact number on it because everyone is different, but these numbers are a general guideline).

Plyometrics are another great way to incorporate muscular power training into your lifts. Plyometrics are exercises that exert maximum muscle force in a short amount of time. Exercises like jump squats, split squat jumps, box jumps, and depth jumps are all forms of plyometrics. The goal is to spend as little time on the ground as possible. You want to take advantage of what’s called the stretch shortening cycle. The muscles get stretched and store energy, just like a rubber band would. Once you release the energy, the muscles release that stored energy and contract quickly, just like a rubber band once you stretch it and release it. However, if you don’t perform the movement fast enough, the muscle will stretch and then relax, and you won’t get the same elastic recoil and explosiveness that we’re going for.

Keep in mind that when you’re lifting weights, it shouldn’t feel anything like endurance training. You shouldn’t get out of breath or extremely sweaty. Instead, your muscles should feel like they can’t lift anymore weight. Endurance athletes get this wrong by not lifting heavy enough, doing too many reps (like 10+ reps for 3 sets), and not taking enough rest between sets. Remember, you’re training differently than you would if you were to go out for a run or bike or swim. So, the training should feel different and elicit different responses from your body than what feels “normal” to you.

In that same vein, you shouldn’t lift weights or do plyometrics with the same frequency that you would do endurance exercise. If you’re doing it right, you should not do these every day. Lifting weights and plyometrics should be done 1-3 times per week with 2 days between sessions, starting at the lower end and progressively working toward the higher end after weeks to months of training. And in order to minimize soreness and maximize recovery time, it’s best to work the same muscle groups on the same day. For example, if you have a hard run or bike on Tuesday, you should also lift legs on Tuesday. That way, you can have Wednesday as a legs day off to recover from the run/bike and lift before doing another run/bike.

Obviously, this is a very complex situation and requires a lot of nuance. Each athlete is different and should work closely with their coach to implement a proper strength training program into their training plan. But hopefully, this gives you a general rule of thumb as to how to start!